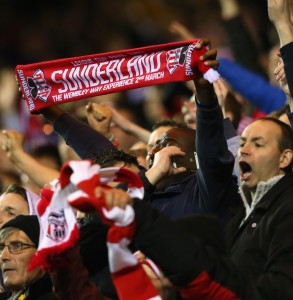 Players get traded all the time. In soccer, players are “transferred”. (I think that’s what it’s called. But I’m a filthy American that never quite caught hold of futbol fever. Don’t judge me … I’m trying.) But I’ve never heard of trading delicious food dishes, especially between a league here in the states and the English Premier League. But on Saturday, D.C. United and Sunderland AFC are making the food swap:

On April 11, D.C. United will host a “Transatlantic Food Exchange” day with its UK sister club, Sunderland AFC. (…) Fans at RFK Stadium will be treated to a British pub staple when the Red Bulls come to town: Steak and Ale pie with “chips” and beef gravy. Across the pond, fans at Stadium of Light will be able to get their hands on a torn beef baguette with DC-style fries to give them a taste of the much-loved cheese steak during their home game against Crystal Palace FC.

Fans will also be able to enter a raffle to win merchandise, local food items and VIP tickets to future games. To be in the running, fans must purchase the tasty concoction being served at their respective stadium.

A food swap is one thing. Tying it to raffles to win prizes is brilliant. Because even if you lose the raffle, in the long run, you’ve won … because you have had a delicious meal from across the Atlantic. And cheesesteaks in England? That should finally put us even for that whole Revolutionary War thing. You’re welcome, England.

(An addendum from the Ugly American blogger … that steak and ale pie looks pretty good too.)