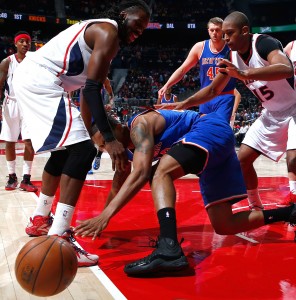 The New York Knicks have had a rough season, and that’s putting it mildly. They were out of it since Opening Night, their star player was injured all season yet risked further injury so that he could play in London and in the All Star Game at Madison Square Garden, and they stunk so bad in Phil Jackson’s first season that they had a very special One Shining Moment video created special for them. But they didn’t quite stink bad enough to get the most ping pong balls in next month’s draft lottery, which may cost them a chance at Karl-Anthony Towns, or whoever they would want with the number one pick. For a franchise that has had to endure an ugly sexual harassment suit involving Isiah Thomas, salary cap hell since they traded Patrick Ewing to Seattle, and Billy Donovan as their point guard, this season has been pretty bad even by those standards.

So the Knicks organization tried to make amends with their faithful, as for the last game of the season against the Detroit Pistons last night, the Knicks made concessions free for the entire game. And not just the cheap stuff … pretty much everything but alcohol.

This kinda ticked me off. Last Thursday I went to what will likely be my final Rangers game of the year at MSG. The barn on 33rd and 8th underwent a massive three year renovation recently, and it included an upgrade in food choices which includes the Daily Burger, new chicken dishes, and a sausage hero which includes Gruyere cheese and crispy onion strings. Those sausages cost $12. My wife had the pizza which was $15 with a soft drink and not as good as she thought it would be. So here’s an actual conversation that happened between me and my wife after the game:

Me: You know, we could get cheapo tickets to a Knicks game just to get the food. We can have one last Daily Burger until October.

Her: You’d go to a Knicks game?

Me: Well yeah, for the food. We get a burger, leave at halftime.

Her: You’d leave a game early?

This outing didn’t happen. But if I had known that food would be free, you’d be damn sure that this would have happened. And that’s why I’m ticked off. Those burgers and sausages are pretty damn good.

But two people that did go were Seth Rosenthal and Rodger Sherman of SB Nation. And they got their money’s worth from this free offer in the name of “crippling an empire”:

We figured the Knicks expected to give away a couple hot dogs and sodas per person, so we sought to ambush them by milking every calorie and every dollar we could. We understood that the usual mark-up on concessions at MSG is so ridiculous, and James Dolan’s wealth so vast, that none of our efforts would matter. We also understood that this was an untimely revolt — Dolan has always been a meddling tyrant of an owner, but the Knicks were about to finally complete a much-needed season of purging and tanking under the apparently autonomous Phil Jackson.

And revolt they did. They indulged in everything they could … from shrimp and lobster rolls to prime rib sandwiches, and yes … a sausage hero. They were procuring large bags to take stuff out of the building after the game and give them to homless people. Seth and Rodger chronicled their pursuit in great detail, so give them a look. And way to fight the power, boys.