J.J. Watt was the runner up for the AP NFL MVP award last season, finishing behind Aaron Rodgers. If the award just eludes his reach again this season, it isn’t going to be for lack of trying … or lack of eating. J.J. put his diet out in sketchy detail as he didn’t want to give away all of his secrets. But he says he puts away between 6,000-9,000 calories a day, and it’s the bad foods that he says give him that extra edge:

Watt’s body lagged behind his mind, though. Having trained the Houston Texans defensive end since high school, Brad Arnett noticed something was wrong during a workout back in February. Watt also noticed. He knew his body well enough to know it just didn’t feel right. “My body was grabbing for something that wasn’t there,” Watt said. “It was trying to fuel itself with no fuel.”

If he ate eight chicken breasts in one meal, Arnett suggested he wrap three of them in bacon. Daily. That meant adding mashed sweet potatoes, more pasta, fish, olive oil and coconut oil in his cooking and avocados.

See? Bacon makes everything more tasty and wonderful. Bacon is probably why he was able to catch three touchdowns last season in addition to all the other awesome things he did on defense. Yup … bacon. It needs to be in your life for you to catch touchdowns. 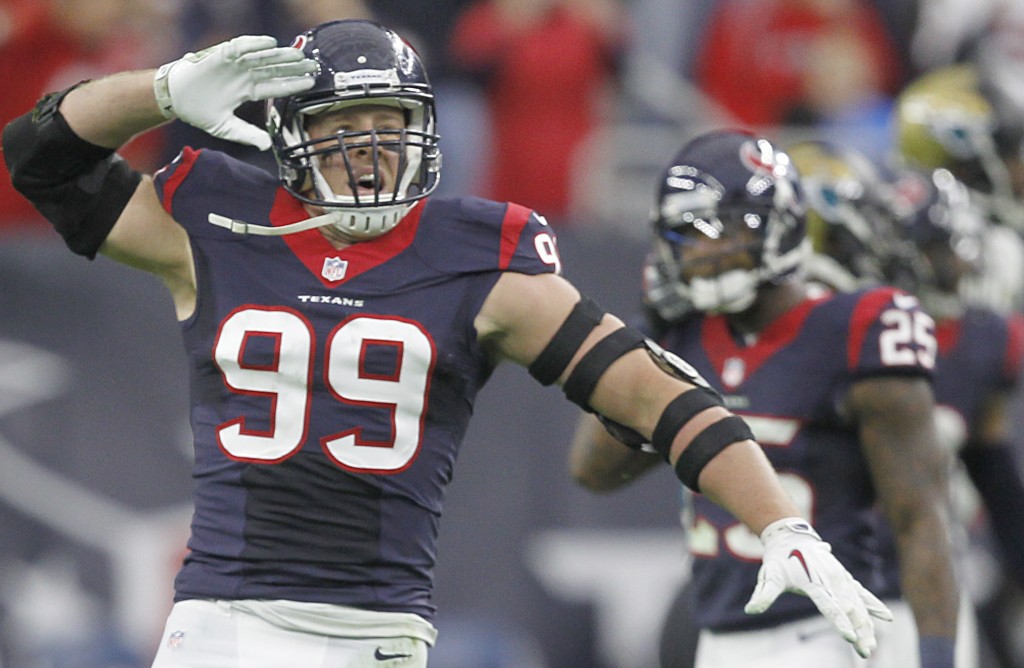 However, I do take issue with one thing Watt said when he was talking about his cheat meals:

“I love brunch,” Watt said. “Brunch is my favorite meal. I went there (to his favorite brunch spot in Wisconsin), had brunch, had a massive potato pancake omelet, which is an omelet inside a potato pancake. Then I had stuffed French toast with berries and stuff. My cheat meals aren’t even that exciting. That was my cheat meal. The omelet is still pretty darn healthy. The stuffed French toast was the cheat meal, but that was delicious.”

What? An omelet wrapped in a potato pancake isn’t that exciting? J.J.! You have me more than excited to find a place that not only wraps an omelet in a potato pancake, but isn’t all the way in Wisconsin. In fact, this is the most excited I’ve been since I discovered cheeseburger spring rolls in Toronto. Dude … you’re seriously underselling the excitement level of what seems to be culinary heaven.

(J.J. Watt catching a touchdown due to him being introduced to bacon, no doubt, courtesy of Jason Miller/Getty Images)